Situated in Wilderness Lane this secondary school was built in 1965, opening in July 1966, by West Bromwich Metropolitan Council and served Sandwell and part of Birmingham.

The school's final head teacheriwas Mrs Caroline Badyal. She arrived on a secondment from the Dormston School in Sedgley in September 2002, and received the job on a permanent basis in April 2003. She is the the designate head of the Q3 academy that will replace Dartmouth High School in September 2008.

On 17th November 2003 a fire caused serious damage to the school, destroying the Science block.It was closed for some weeks with the children being coached to other locations to continue their education. Temporary building were constructed pending the planned building of the Q3 academy on the site by 2009. 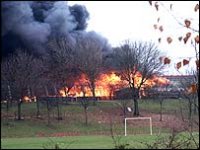 TV personality Cat Deelay and construction tycoon Pardeep Panesar are both former pupils at the school.

In association with Dartmouth School Library information on the history of the School will be added to this site in due course.