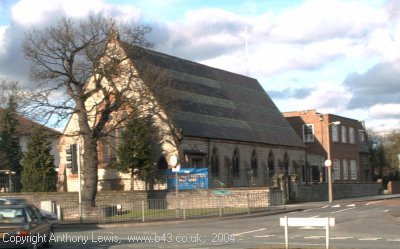 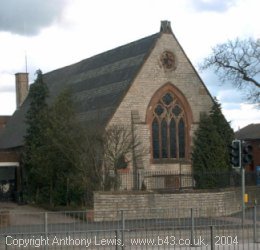 "The principal Wesleyan Methodists of Great Barr, deeming it desirable that they should have a Chapel and Schoolroom etc erected in that locality, Stephen Stokes, Esq., invited a few friends to meet him at Fairyfield House on the 20th April, 1866 for the purpose of deciding the question and taking the preliminary steps. "

The Architect proposed was Mr. Samuel Loxton of Wednesbury. Tenders were sought and after negotiations a Mr. Crutchley's price was accepted.

In 1875 it was decided "That a gate be erected in front of the Chapel Porch, it being deemed necessary for the convenience of carriages in wet weather."

In June 1938 a proposed building scheme received approval at approximately £5,000, a sum of £1,500 to be raised locally. The stonelaying was on November 12th, 1938, the dedication address by the Rev. Aaron Smith. The size of the church was nearly doubled, the entrance porch removed and a new entrance made on the same side but at the western end, the organ and pulpit positions reversed, pews removed, outbuildings and earth closet removed, new watertight heating chamber, vestries, lavatories, kitchen, new room and large hall built, to the limit of boundaries, and the old belfry with its tiny spire was removed.The opening was on July 1st, 1939, by Dr. C. M. Stubbs and the dedication by the Rev. Aaron Smith.

By 1952 the Sunday School had increased to 500 and further accommodation was urgently needed and subsequently plans were approved in October, 1955.  The stonelaying was on April 26th, 1956. The opening ceremony was on March 15th, 1957.

The state of the organ had caused concern for some time and in 1960 a tender for a new one was accepted at £2,300. On September 14th, 1961, the new organ was opened by Mrs. Olive Ratcliff and dedicated by the Rev. W. Russell Shearer. The organ was built by Nelson & Co. of Durham and has a detached all electric drawstop console and includes 20 stops, 7 couplers, 860 pipes, 7 thumb pistons, 7 toe pistons, balanced crescendo pedal to swell organ, two full manuals, 61 notes, pedal organ 30 notes.