Post offices form the basis of traditional written communications. There have been a number of Post Offices serving the area.

The 1911 census shows Thomas Richards (age 83) as the Post Master living with his wife Mary (age 84). Also shown is their grand-daughter Lucy Richards (age 24) whos occupation was shown as 'Assisting in Post Office'.

In the 1920's the Post Office was in a front room of a house in Newton Road,opposite to its current position. It contained the only public phone in Great Barr.

In the 1930's the new Post Office was built with a telephone box outside. 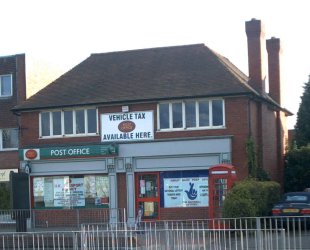 - 268 Newton Road, Great Barr West Midlands B43 6QT, originally in Bowstoke Road has moved into the general store on corner of Newton Road

The original Post Office was in "Post Office Row" on the Old Walsall Road just below the viaduct.

The Post Office was moved on January 28th 2016 into the Bargain Booze newsagents in old Walsall Road.