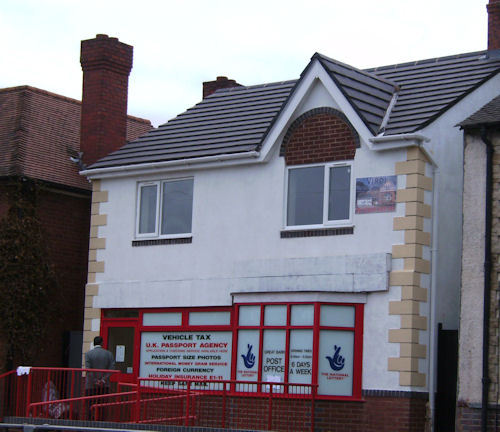 In the spring of 2009 work had recommenced on the development of the new post office at Scott Arms. Planning approval has been agreed for an new detached shop to be built.

The original plan was to convert the original No32 (a semi-detatched house) into a shop but during development the house was demolished leading to a long battle with planners and the neighbours at 34.

On Jan 24 2006 Neil Elkes reporting for the Birmingham Mail reported - "MOST people dream of owning a detached house, but a retired Birmingham couple would much rather have their old semi back. Fritz and Anna Blech were stunned to discover that instead of building an extension, their neighbour in Newton Road, Great Barr, had pulled down his house. The couple, aged 68 and 59, have lived happily for 17 years in their house next-door-but one to the Scott Arms shopping parade. But all that changed when local sub-postmaster Jeet Sahota decided to turn the connected home into the new Great Barr Post Office. Instead of building an extension as planned he has had number 32 demolished - leaving the Blech's home all alone for the first time since it was built".

Being built in a similar style as a detached shop. It opened as a Post Office on  24th August 2009.