Robert Wellbeloved married Sarah Scott, taking her surname, on 17th February 1830. The change off name was reported as follows: 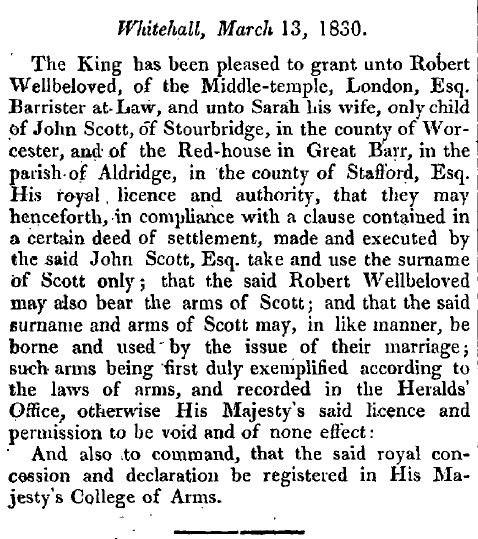 Sarah Scott was the only daughter and heiress to the family estates of John Scott (1764 - 3 Jan. 1832). Thus in 1832 Robert Wellbeloved Scott inherited much property in Great Barr and other areas.

He sat as Liberal M.P. for Walsall from 1841 to 1847, and became Deputy Lieutenant and High Sheriff of Staffordshire, with residences at the Red House, Great Barr; Cambridge Gate, Regents Park, London; and High Street, Stourbridge. In 1845 Robert Scott purchased the manor and estates of Ratlinghope, between the remote hills of the Long Mynd and the Stipperstones in Shropshire, with land at neighbouring Norbury and Wentnor. He and his wife had one son, John Charles Addyes Scott and three daughters. Robert Scott died in 1856 .

More information on Robert Scott can be found here: (www.wellbelove.org/robert.html)

In March 1832 the property was advertised in the Birmingham Gazette for rent, being available from Lady Day, 25th March 1832. 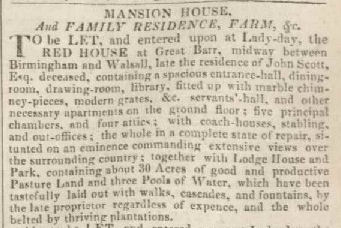 To be LET and entered upon at Lady-day, the RED HOUSE at Great barr, midway between Birmingham and Walsall, late the residence of John Scott, Esq. deceased, containing a spacious entrance-hall, dining-room, drawing room, library, fitted up with marble chimney pieces, modern grates, &c. servants hall, and other necessary apartments on the ground floor: five principal chambers, and four attics; with coach houses, stabling and out-offices; the whole in a complete state of repair, situated on an eminence commanding extensive views over the surrounding country; together with Lodge House and Park, containing about 30 acres of good and productive Pasture Land and three Pools of Water, which have been tastefully laid out with walks, cascades, and fountains, by the late proprietor regardless of expense, and the whole belted by thriving plantations.

Whites "History, Gazetteer & Directory of Staffordshire, 1834", stated that "Red House, near Sneal's Green, is a neat Gothic seat" and belonged to Robert Scott Esq, but occupied by John Vaughan Barber esq. who was a Banker in Walsall (Barber and Marshall). The Jackson's Oxford Journal recorded that John's wife Elizabeth (nee Wickes) had died in Great Barr in 1833 aged 58. They had married in Tewkesbury in January 1798. In June 1835 the Staffordshire Advertiser recorded his eldest son, Croomer Barber, had died in Derby, and in 1836 his only daughter Eliza had also died aged 35. In October 1840 a sale was advised of all the contents due to Mr Barber "declining housekeeping". In 1841 John Vaughan Barber was recorded in the London Gazette as being bankrupt. A John Vaughan Barber, Gentleman of Leamington Priors, is recorded as having died in 1856. 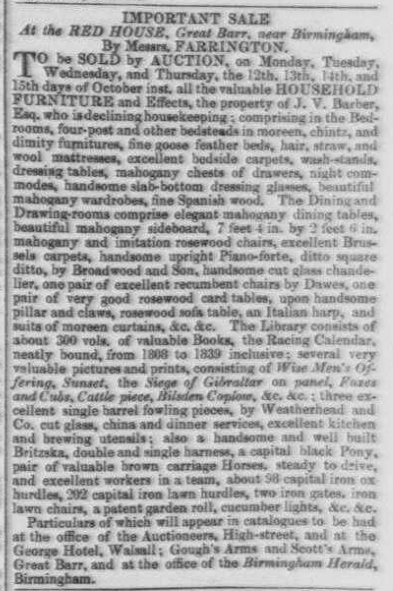 The census of 1841 shows John Horn, Engineer, in residence. He is shown in Transactions of the Institution of Civil Engineers as living at the Red House, as an Associate Member in 1841.