Red House was taken over by another wealthy ironmaster, Mr John Marshall a partner with Mr Hill in the Wednesbury Patent Shaft and Axle Tree Company. Documents indicate that Mr Marshall applied to take over the Red House in November 1861, to move in during 1862.

"A WEDDING FESTIVAL - On Monday last the workmen in the employ of Messrs. Marshall and Mills of Monway Ironworks, Wednesbury, and Victoria Works, Pleck accompanied by their wives, and numbering altogether 400, assembled on the lawn at the Red House, Barr, to celebrate the marriage of John Marshall, Esq. An excellent dinner, which was prepared and served by Messrs. Lissiter and Miller, of Birmingham, in a most creditable manner, was partaken by the company, in a large and beautiful tent. Mr. Henry Mills, who presided as chairman, proposed, in a very suitable speech “The Health and Happiness of the Bride and Bridegroom”, which was drunk by the whole company with enthusiasm. The healths of Mr. and Mrs. Mills and family were also drunk, with musical honours, after which interesting speeches were made by Messrs. Hayward, S. Perry, Z. Mills and Henry Banks. The company separated about seven o’clock in the evening, very much pleased with the days entertainment. The Gold’s Hill Band accompanied the party, and played during the day some excellent music."

The records from the committee book for the Great Barr National school covers the period 1856 to 1893. Most of these meetings were held at the Parsonage, but one is recorded as being held at the Red House. "11/Sep/1866 held at the Red House present were Mr Marshall , Mr Page, Mr Stokes, Mr Adams, Rev Stokes, it was resolved that the joint salary of the master & mistress would be £110 p/a. Letter was received from Mr Edward, he was asked to stay in his position till Christmas. Testimonials were received from Mr and Mrs Arthur Woods, they are to be interviewed as soon as possible". It would seem Mr Marshall was a committee member from November 1864. Entries show regular attendance until 1876.

It is written that the establishment was at that time "medieval and patriarchal" in character as regards the staff of servants. There were ten in the house, three in the stables, three in the gardens, a gas man, a baliff and several others. A gas making plant had been installed for lighting in the house and grounds. A number of cows, pigs, sheep, goats etc. were kept for home use. The grounds were kept in perfect trim and a woman was specially employed to keep all the walks weeded. The grounds included such attractions as woods, pools, hermitage, bower, obelisk swan and fish hatchery, and a summer house. It is said an old one-eyed swan ruled over one of the pools and would allow no one to approach it.

An interesting story is told concerning the animals at the estate. On one occasion a billy-goat and a ram were lost for several days and were eventually found in the summer house. It had appeared there had been a terrible fight between the two resulting in broken horns and other serious injury. In the fight they had backed into the summer house and closed the door on themselves!

It would seem that John Marshall was also responsible for the Hermatige in Red House Park.

It was John Marshall who gave St.Margarets Church its Font in 1863.

The 1871 Census shows John Marshall aged 61 and his wife Charlotte A aged 38 with five sons and a daughter, aged between one and seven

The 1881 census shows Charlotte Marshall was by then a widow at 48, with no children recorded at the house.

By the Autumn of 1882 The Red House was advertised to be let.

It would seem Charlotte continued to live at the Red House for another year as it was not until Monday October 1st 1883 that there was a sale of the contents of the house, there being auctioned off 'on the orders of the Executors of the late John Marshall'. 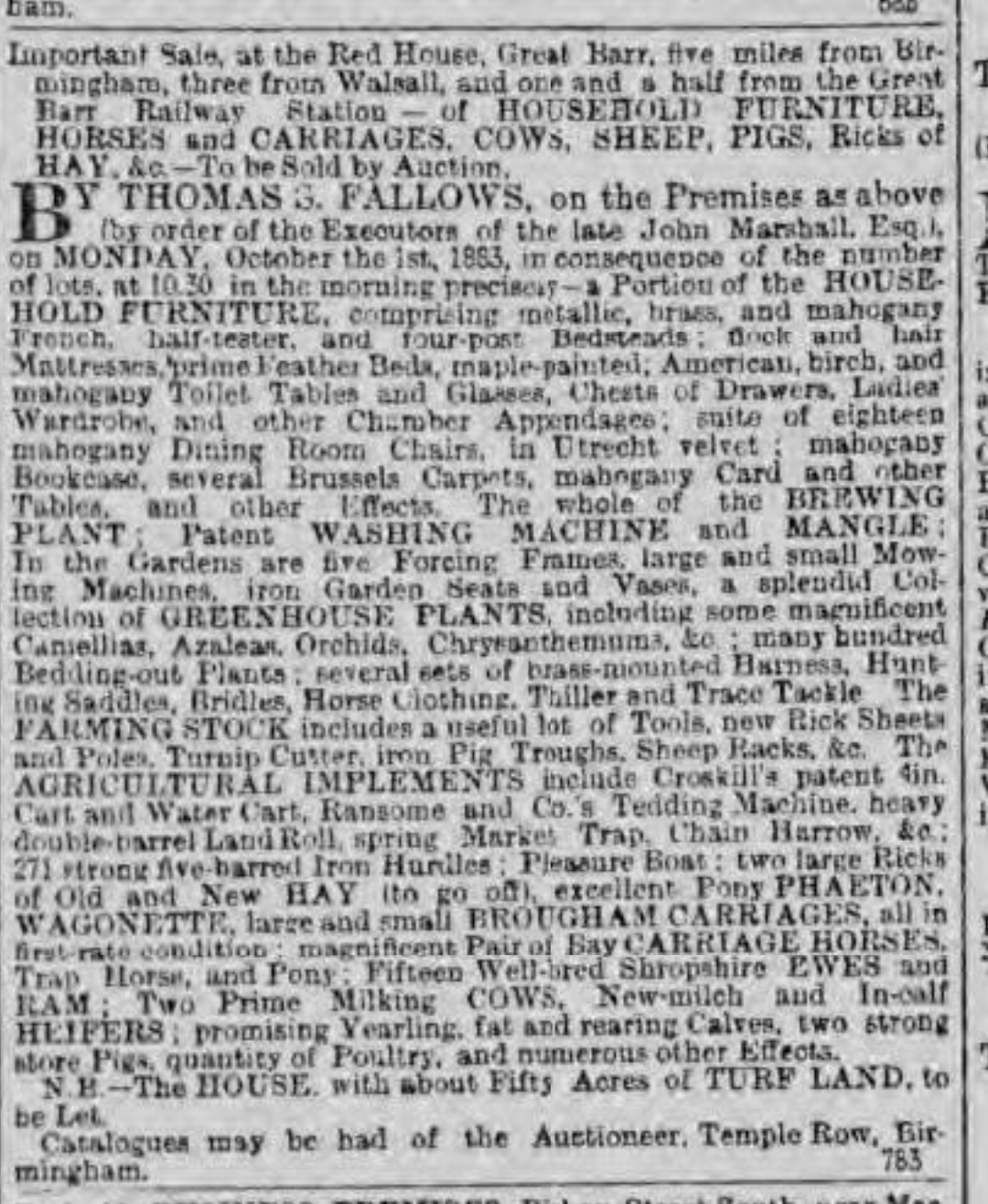 Other sales of the Late John Marshall's effects occurred over the next few years with a sale of paintings and a sale of fine wines. 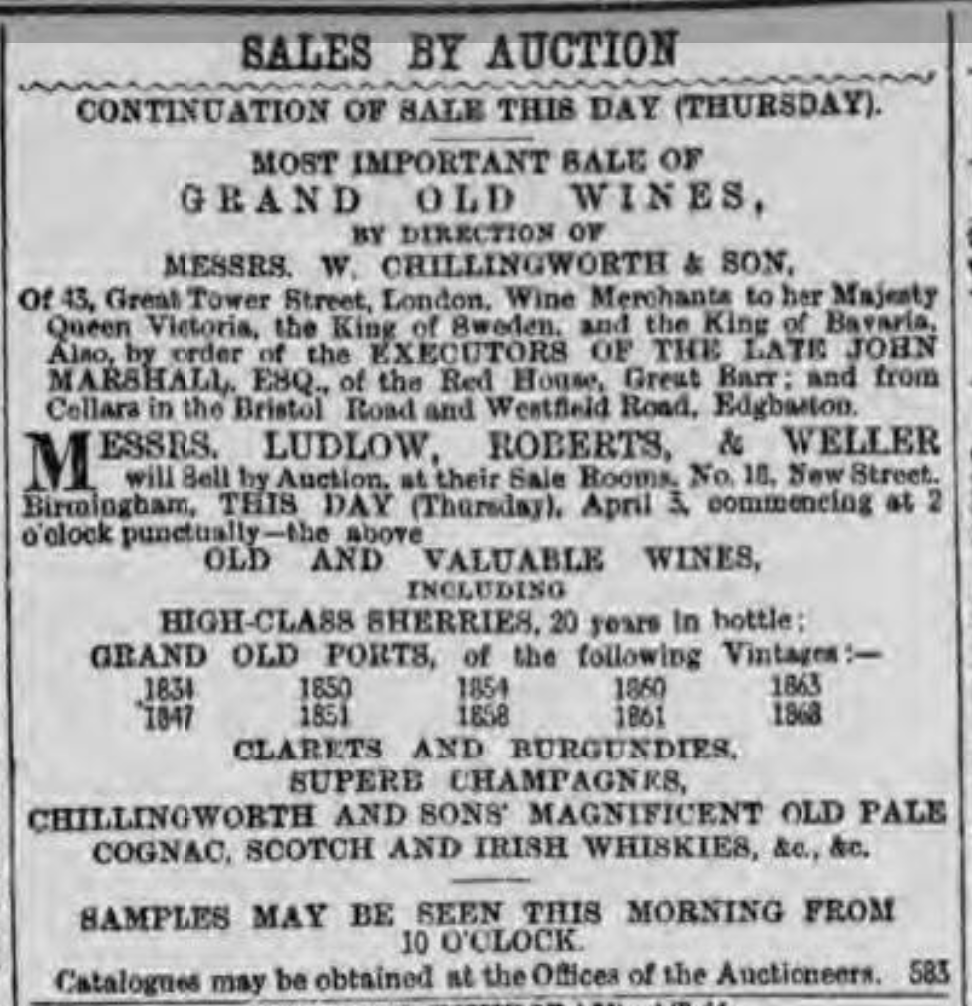