When considering the history of the Red House it is important to start with a brief summary of the two important Great Barr families with links to the Red House. The following information has been out together from varous sources and any corrections would be welcomed.

The Scott family has been living in the area since about 1332, although it was not until 1791 that a Scott became Lord of the Manor when Joseph Scott inherited the Manor from the Hoo family. The Scott Arms had been granted in 1663. Joseph resided at Great Barr Hall which was originally called the ‘Netherhouse’ and had been in the Scott family since the early 17th century when Richard Scott moved there. Joseph re-built and extended the Hall in 1777. Joseph Scott was created a baronet in 1806. Great Barr Hall was the main Scott residence (apart from in the late 1700’s when it was leased to Samuel Galton) until the death of Lady Mildred Scott in 1909. It is mainly the Scotts who lived at Stourbridge and Ratlinghope (Shropshire) who owned the Red House and numerous estates in Great Barr. The Scotts are still remembered by the Scott Arms shopping centre and public house.

The Addyes’s (also sometimes given as Addis or Addys) who have links with Great Barr since the early 1500’s when Sir Degory Addyes (c.1465-1521) was resident in the area.

The Red House appears to have formed part of the original Addyes estate and became linked with the Scotts by marriage. The family links are given here.

The earliest written record we have of the Red House is in Anne’s obituary of 1813 from “The Gentleman’s Magazine” which stated “Her remains were interred, Jan. 18, with deserved honours and real grief, at Great Barr, in Staffordshire ; the Red House in which village had long been her country residence”. Thus it appears from 1786 to 1813 the Red House was extensively used as a summer residence, inherited by Anne Scott through her maternal line from the Addyes family. Anne Scott was a benevolent lady well liked in Great Barr and her obituary gave clear indications of her generousness.

“The greater the abundance bestowed on her by a liberal Providence, the more freely did she give to others. Every augmentation of her paternal fortune she employed as an instrument of advancing the happiness of mankind. Her language was, "I am a steward for my Heavenly Master:" and, as she approached the close of a life extended to nearly 83 years, she repeatedly said, " Let it be my care, while I continue here, to do all the service in my power to my fellow-creatures." Her bounty flowed perpetually in almost every conceivable channel. Pure and refreshing, it gladdened the eyes of beholders as well as the feelings of the subjects of it”

Ann Scott died on 8th January 1813. Having no children the estate passed to John Scott.

It was Robert who built the current Red House. He was the Liberal member member for Walsall, and retained his seat in Parliament until 1847.

They had four children:

John Charles Addyes Scott succeeded his father, Robert Wellbeloved Scott, as Lord of the Manor of Ratlinghope and patron of the living. John Charles was a merchant dealing in nails and chains. He may have been what was known in the Black Country as a 'fogger', who supplied iron sheet or rod to backyard workshops in the region and then collected, and paid for the finished product.

Tradition has it that one day, when walking in Cradley, he heard a woman singing. Her voice was so sweet and beautiful that it tempted him to seek her out and it was Mahlah Homer, singing as she worked in her father's nailshop. She and John Charles became friends, their friendship turned to love and they married on 1 July 1863, when Mahlah was 29. Their only child, James Robert, was born on 31 October 1864. [Information from www.cradleylinks.co.uk]

They had one child James Robert in 1864.

John Charles died in Italy in 1888 and Mahlah died almost 20 years later, in tragic circumstances at Bournemouth. When out driving in a coach with friends on Sunday 2 June 1907, one of the horses stumbled. Mahlah jumped out and fell, being struck on the head by the door. She died two days later, aged 73, and is buried in the churchyard at Ratlinghope.

[Information and photograph from www.cradleylinks.co.uk] 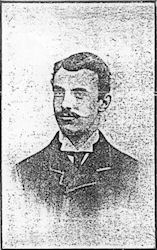 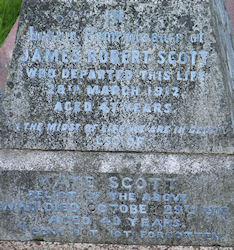