The Red House is situated in Red House Park in Great Barr. 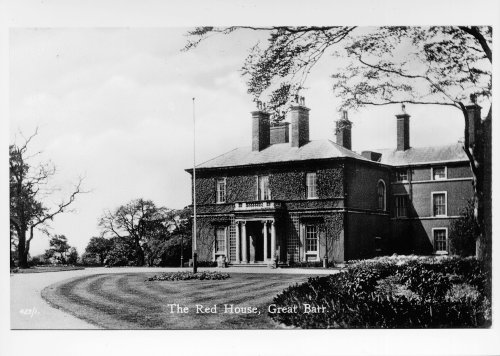 The current builidng dates from around 1841 when Mr Robert Wellbeloved Scott (1803-1856) of Stourbridge built the Red House on his 27 acre estate. The name Red House probably dates from the late 1700's when it was the summer residence of Anne Scott  (1731-1813) and there is evidence of earlier buildings being on the site. The Addyes-Scott Families have been associated with Great Barr since the 1500's and it is probable that the Red House estate was in their hands from the 1500's until 1920 when, following the deaths of John Robert Scott in 1912 and his wife Kate in 1916,  it was sold with many other local properties covering a total of 382 acres. In 1921 it was sold to West Bromwich Corporation as a sanatorium but was considered unsuitable and was opened as a park in 1929. The Park continues in Council ownership but in 2015 Sandwell council agreed to sell the house to be developed as eight luxury apartments with six additional properties on the site.

The History Timeline pages on this site document the owners and tenants of the house and estate through the years. Research is ongoing into finding more about the history of the house and its estate and any further information is welcomed.

At its sale in 1920 the accommodation comprised:

There was a paved Yard with knife House, w.c.’s, and Laundry, Stable Yard with two large Coach-houses, two-stall Stable with Loose Box with lofts over, and Caretaker’s Cottage.